Bob has several other music projects in the planning and some offers also.

A joint project is Bob in conjunction with Andehlian Band from Friesland in the Netherlands. More information on the Bodehlian page.

A Scottish theme show is in the process of just having started. Bob sings the lead and MC's in much of the show. The show is aimed at the corporate market in Scotland. Already it has performed in a Scottish Castle.

As well as Bob's solo acts. Bob has always wanted to tour with a support band for his own songs. He is actively writing, recording and producing the music for this dream. He hopes to have the Bob Ferguson Band and show on the road sometime in 2018/19.

In Netherlands Bob performs in THE BOBBAS duo.  See their page for this lively and crazy duo. In addition to this duo is a trio project aimed at folk clubs and festival. The trio will be named BOBBASAN

In Scotland Bob performs in the SCOTTISH CORPORATE ENTERTAINMENT BAND. They perform concerts and ceilidhs at corporate events 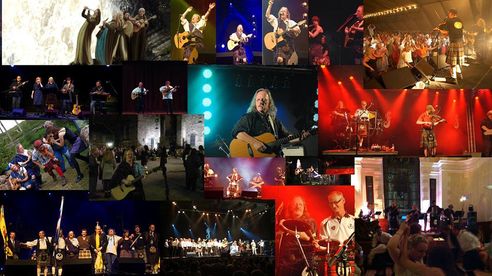